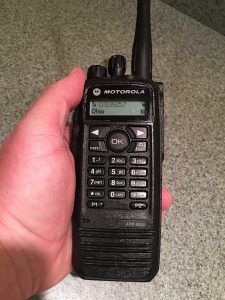 The Motorola XPR-6550 is different from the other ham radio oriented radios that are part of this review series. It is built for commercial and business operations, not for ham radio. You’ll often see the XPR-6550 hanging on the belt of police and fire personnel, factory workers and hotel/event staff. The radio is single band – covering ONLY VHF or UHF depending on the model you get (mine in this review is UHF only), and can be had on the used market for between $180 and $250. The radio does both analog FM and DMR, including Motorola’s DMR-compatible enhanced MotoTRBO.
What makes this a commercial/business radio rather than a ham unit includes:
Pros
Cons
To sum it up, I’d probably steer away from the Motorola XPR-6550 for ham radio use unless you either can obtain one very inexpensively and know you have what you need to program it, or if your tolerance for bugs is so low that you’re willing to put up with all the Motorolaness.