This is the third in a series of short reviews of handheld/portable/HT radios. Read more about the series here. 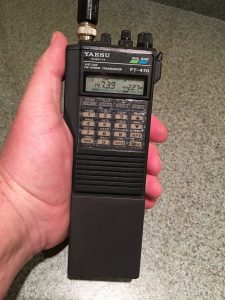 Not long after Yaesu introduced the FT-23/33/73 series of radios in the 1990’s they followed it up with a full featured dual band radio with direct keypad frequency entry, 42 memories, and a sturdy metal case. Accessories like batteries, car adapters, and speaker-mics are interchangeable with the FT-23/33/73 series, the FT-211/311/411/911 series.

CTCSS encode and decode is also built into this radio. Unlike many of 2018’s modern dual band HTs, the FT-470 is a true dual band radio that can transmit on one band while simultaneously receiving on the other band. This is an especially handy feature for working Low Earth Orbit satellites like AO-92, where the ability to hear your own downlink signal coming back is very helpful.

The FT-470R is slightly larger than the other models in the series, but it is essentially two radios in one.

Typical used FT-470R radios do share the noisy PTT switch and volume and squelch controls with the earlier models, but those are easy to fix with a can of contact cleaner. The PTT switch can be accessed without disassembling the radio by pulling back the rubber cover to spray the switch with contact cleaner. It would also be unusual to find a used FT-470 with working original batteries, but since the batteries are the same as at least 7 other Yaesu models it’s fairly easy to find aftermarket replacements.

While this radio is over 25 years old in 2018, it’s still very viable and usable in today’s world. I use this radio for QSO’s on local repeaters and would recommend one for anyone if you can find one at a reasonable price online. These radios can typically be found for less than $100 with a few accessories. You can get a newer Chinese radio for the same or less money, but these sturdy older rigs have consistent performance and a sturdy feel you can’t get form a newer plastic HT.