It was another great Field Day for The Silvercreek Amateur Radio Association. See John N8CD’s great write-up for some details and pictures of the event!

Additionally, SARA operated WW8TF as a GOTA station (WW8TF is the club call of the Wayne Technical Fanatics who are all also SARA members). WW8TF had 14 GOTA contacts on Phone for an additional 28 points (14 QSOs * 2 power multiplier).

That brings the combined total of all radio operations to 1918 points!

Additionally, we accrued 1490 bonus points in the following categories:

That gives us a grand total of 3408 points for Field Day 2018. This is our best score in the last 12 years and our third highest QSO count (see below for full data).

I want to thank everyone who came out an operated (some statistics at the end of this article). I especially would like to thank the following:

Additionally, I would like to thank everyone who helped setup and tear down our Field Day operations. The ones I know for sure are: Gary Shorter AA8CS, Zeke Zadrika AB8OU, Ken Dorsey KA8OAD, Benny Murawski KC8DEO, Fred Sheppard KD8CVS, Brooker Breece KD8JNX, Mike Gerlach KD8TQU, Jeff Royer KE8HEA, Barry Youmans KI8B, John Wagner N8CD, Del LaBo N8OFP, Mike Burg N8QQN, Marty Baker N8XPK, Bob Scaffidi WD8KND, Eric Mast WD8KNL, Milorad Cucuz WW8TM, and Chris Talaski. There were others, especially those that came in right at the beginning of field day to visit who ended up helping with the guy wires on the military mast, but I didn’t get to record/meet them all — but if you were there, thank you!

Finally, I would like to thank our “independent” photographers Jeff Royer KE8HEA and Del LaBo N8OFP for providing some great additional photos of our operation.

Note: This article was updated from the original July 3, 2018 to fix an error in the tabulation of the GOTA station points.

The N3FJP software calculated our total operating time across all bands as 20 hours and 56 minutes (deducting breaks detected > 60 minutes).

Unsurprisingly, the highest percentage of our contacts by ARRL Section were in Ohio (10%) followed by Michigan (7%). Beyond stations in the US, we made 43 Canadian QSOs and two from Europe (France, Hungary).

We had 12 distinct logged-in operators working W8WKY and two GOTA operators on WW8TF. 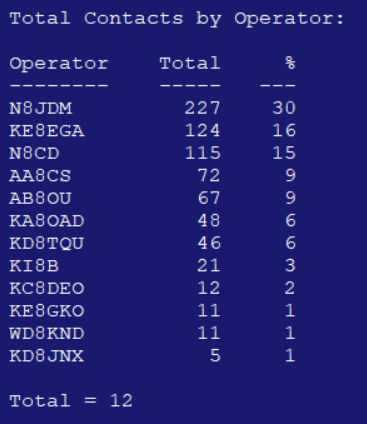 Several people have asked about previous scores. Looking at the ARRL online database, we had the following scores back to 2006 which is the first entry for us:

This year appears to be our best score in the last 12 years and our third-highest overall QSO count total.