April 18 th SARA Fox Hunt…. aka A simple Fox Hunt with a TWIST….
Carol (N8SIN) and Gary (N8OGK) volunteered to be the Fox for this hunt.
Gary tells me that, Carol has been scheming…. I mean planning this fox hunt all winter long.
Carol says this is going to be a “ Simple Fox Hunt with just a little TWIST”…
After hearing this, all of us who signed up to hunt are wondering just what we’ve have gotten ourselves into.
A little history for those who may not have been around for some of Carol’s previous Fox Hunts or for those who may have forgotten….. According to Carol all of her Fox Hunts are “Simple”, but we know better.
Example:

There was the one that ended at the end of a dead end road in the middle of farm country. Nothing for miles but hay fields, corn fields the fresh odor of cows, and oh yeah the end of the Wayne County Airport Run Way…

Then there was the Fox Hunt that ended at First Street Park in Rittman, but when you got to the park you were asked where the fox, if you didn’t have the right answer you were told no food until you find the fox. We all ended walking around downtown Rittman our quad beam antennas looking for the fox. This fox ended up being at the very top of the flag pole in front of the Police Department. 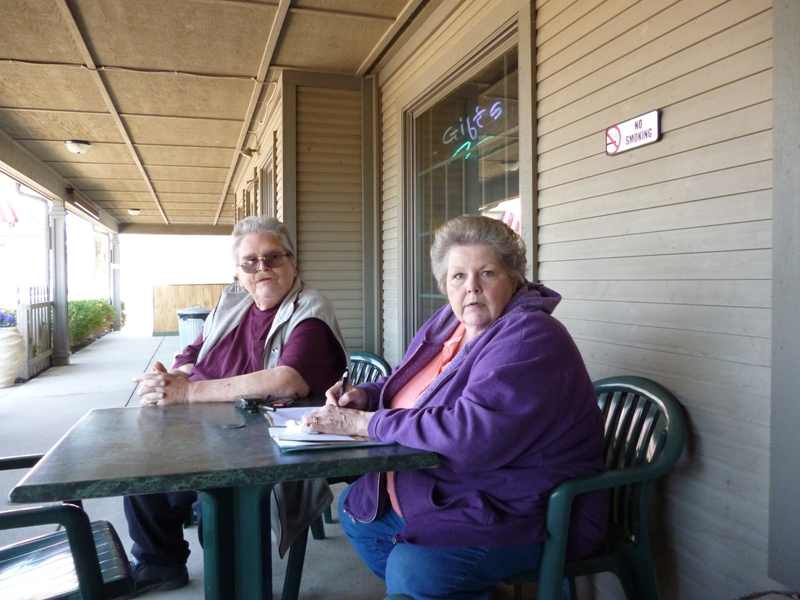 So now you see now why we were all just a little more on edge when Carol said “Oh it’s going to be a simple hunt, WITH A LITTLE TWIST”….

Bright and early this morning us brave, well maybe more crazed that brave, souls show up at Buehler’s parking lot to set off on our journey to find Carol and the fox. The hunters were Barry (KI8B) and his co-pilot Doug (N8ZQG), Mike (KD8TQU) and his co- pilot / wife Becky, Del (N8OFP) and his co-pilot Fred (KD8GYS). 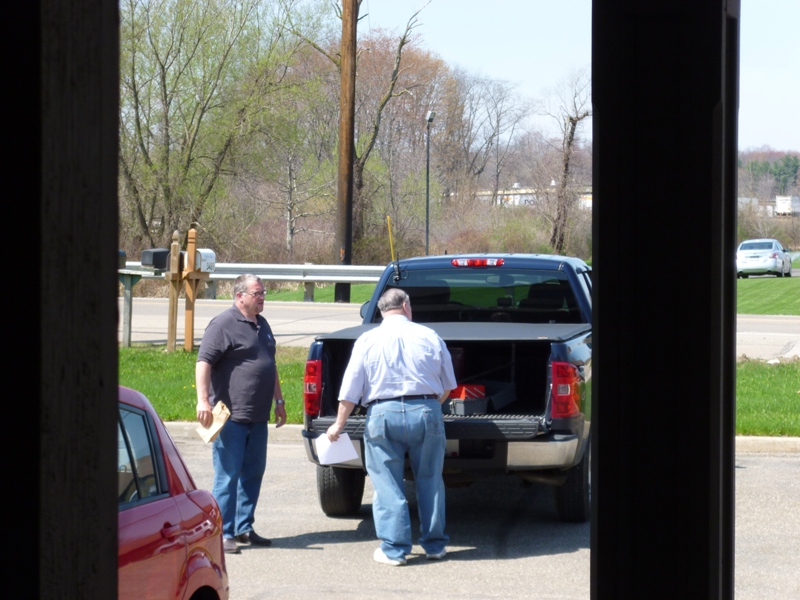 The first thing that told us we were in for a very different Fox Hunt is when we pull into the parking lot and there stand Carol. Now wait a minute, how can she be the fox and be at the starting location. She informs us that her accomplices, Gary (N8OGK) their son and daughter-in-law are hiding the fox while Carol is with us to give us all specific instruction for this hunt..

Carol is on the phone with Gary and according to Gary the fox is on the air. But none of us could hear it from the starting point. After double, triple, and probably quadruple checking the fox, Gary assured us it was indeed on the air. Barry was able to detect a slight quieting if he turned his beam to the North, but it was mostly just static, no tone from the fox. So Carol decides she would give us a BIT of a clue, she said we should head North or was it East… Well which is it North or East? Yeah head North.

With that Carol handed Barry and Doug a packet with a couple papers, a brown paper bag and an “I Give Up” envelope. She told Barry and Doug to read the paper before they left and not to say anything to the rest of us. Barry and Doug left Buehler’s around 9:30AM, followed 10 minutes later by Mike and Becky. Finally Carol gave Fred and me our packet. Like the other we were told to read the two pages included in the packet before doing anything else. So now we know what the twist is….. or is it….???? One never knows when Carol is involved. (See Packet Page 1 and Packet Page 2 below).

After read the pages we are all set to go… I start the car just as Fred jump out the door shouting wait a second…. He returns in short order with a rock, we’ve found our first item on the scavenger hunt. That a good idea, lets see what else we can find quickly. I pop the trunk and get into the tool box, grad a piece of electrical tape (no true ham is ever without electrical tape close at hand), two items found. I also dig out a jump wire (6” long wire with an alligator click on each end), third item found. Hey, there’s a pocket knife, close the trunk get back into the car with my treasures to find Fred had already put his pocket knife in the bag, four items found. I dig in my wallet and find my FCC License Card, five items found. I also dig through the coin holder (that by the way seems to be over flowing) to find 10 pennies. Quarters, dimes, nickels, more quarters, dimes nickels, aren’t there any pennies in here…. Coins are flying all over the car…. Hey there’s a penny, and another…. and 5, 6, 7… more quarters and dimes, 8, 9, 10… alright another item off the list…. Time to hit the road… While I’m driving Fred dig through his wallet and find a business card, we are on a roll… All we need is a drinking straw, popsicle stick, and a flower… We’ll stop at McD’s and grab a straw….. ZOOOOOM right past McD’s. Oh well we’ll find one somewhere. Hey Fred, keep an eye out for a fast food cup laying along the road, we can get a straw from there…. Fred’s response, I’m not touching any straw we find along the road… At our first stop to take a reading with the beam we find our flower (dandelion), our scavenger hunt list if quickly being completed.

We continue heading north, because that is what Carol said to do, and she wouldn’t mislead us, would she. We stop again to take a reading, and to make a quick pit stop… Still can’t hear the fox. By this time we are just a few miles south of the Cleveland Metro Park in Hinckley. We begin to wonder if maybe we’ve gone too far North, after all Carol did say something about going East. So we head East, we’re not really sure where we are.

Then we get a call from Gary on the 39 machine asking if we can hear the fox. Nope can’t hear it at all. We are now entering Bath. We are on high ground so we stop to take a reading, I can just hear a faint tone of the fox when the antenna is pointing “SOUTH”….. Great we went t0o far North. So we head South on Cleveland-Massillon Road, we continue South on Gent road and as we approach Fairlawn we get another call from Gary asking if we can hear the fox. Nope not a peep. We are approaching the intersection of Gent Road and Smith Road (backside of Summit Mall when Barry joins the conversation on 39 by saying they can hear it very loud and clear, nearly full scale with no attenuation. He was on Copley Road at the intersection of Jacobson (or something like that). I know where Copley Road is so we head West on SR18 and then turn South on Cleveland-Massillon Road.
Within a few minutes we are able to hear the fox on Fred’s HT with a rubber duck… FINALLY!!! As we head south the signal is getting stronger. We make a quick stop to see what the beam says after all we DON’T want to make the same mistake twice by going too far South. But we make another mistake, we stopped near several large buildings and the signal was equally strong in just about every direction, getting too much reflection off the buildings. So let continue South and see what happens. As we approach Copley Circle the signal is very strong…

Now I think I bet I know where they are, there’s a pretty large fairly new park off 162 east of Copley Circle. So we head that way but the signal starts to fade, time for a quick U Turn, any cops around? Back at the circle the signal is very strong, we head north on Cleveland Massillon road and turn into a parking lot near some small businesses. The beam is saying it over there, not over there, no no it’s that way…. Ahhhh more reflections off the nearby buildings…. We look around for the antenna and any familiar cars, nothing. So back in the car and back South, then West on 162. The signal is dropping, U TURN…. Then South on 162 AGAIN… Oh no the signal is dropping…. They have to be at the circle…. Another U turn and heading North again. During this entire trek we have not seen Barry’s or Mike’s vehicles. Wonder if they’ve found them already…. I really hate to be last…

Once again we head North on Cleveland-Massillon Road, as we approach Copley Circle the fox is loud and clear. OK time to try a few other tricks. Fred is using his hand and body as a shield around his HT. As we continue North the signal is getting stronger. Time to unscrew the antenna on the HT. Still nearly full quieting, we are close, and we are coming up on the group of small businesses we stopped at earlier. They have to be here…. As we pull into the parking lot I spot it… HEY LOOK
THERE… There’s the antenna… WE FOUND THEM AT LAST!!!! 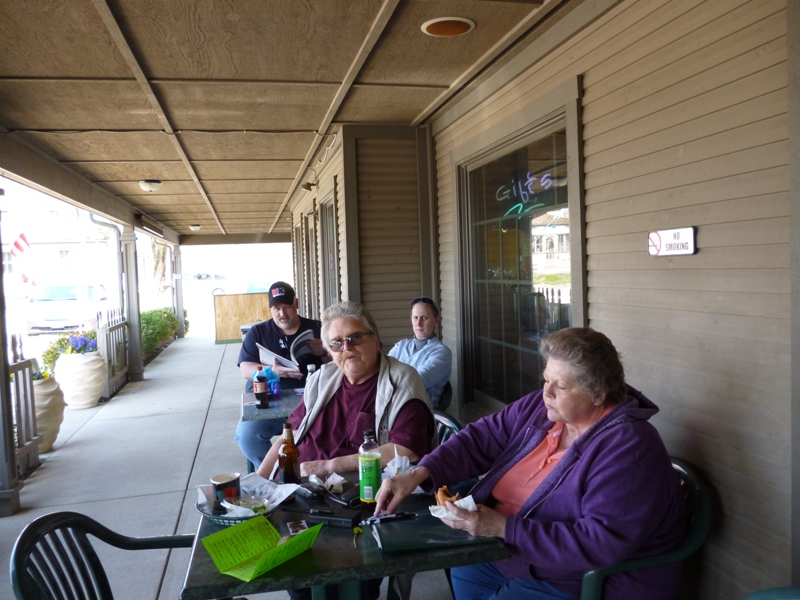 We park the car, turn off all the electronics (that didn’t really help us find the fox…. This time), and head into the building. Looking around we don’t see Barry or Mike’s vehicles. Are you kidding, are we the first ones here? Sure enough, after all the driving we did (28.8 miles to be exact) we were the first to arrive.

After grading our questions (PACKET PAGE2) and checking our brown paper bag for the scavenger hunt items we settle in to wait for the other hunters. We see Barry and Doug drive by at least twice then disappear for a long time. I call Barry on the 39 machine to see where they are. They are in the area but going around in circles. They decide that since we were already there and they were getting hungry that they would open the “I GIVE UP” envelope. Mike and Becky were still hunting, they were
close, they could hear the fox pretty well. A short time later Mike and Becky arrived. 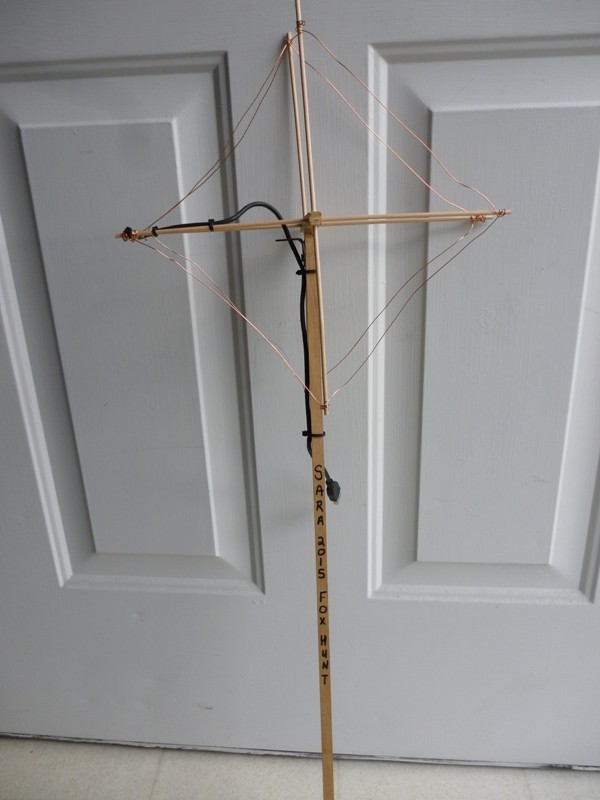 All in all Fred and I ended up with the least amount of mileage so we were awarded the SARA Fox Hunt trophy. Which by the way will be presented to the winner of the next Fox Hunt and so on…
The Fox was hidden at Shisler’s Cheese House on Cleveland-Massillon Road (North of Copley Circle).

The food was outstanding and we had a great time discussing the hunt and lessons learned.
AS ALWAYS ANOTHER GREAT FOX HUNT PUT ON BY CAROL (N8SIN) SARA’s FOX HUNT QUEEN, AND GARY (N8OGK)!!!!

If anyone would like to be the Fox for the next Fox Hunt please let me know, otherwise I will try to plan one for sometime in May.
Best 73 to all!
Del (N8OFP)

You may or may not participate in the scavenger hunt. (MORE POINTS IF YOU DO!!!)
1st , 2nd , and 3rd place winners based on points system.