A small crew of Marty N8XPK, Del N8OFP, Gary AA8CS, and John N8CD met at N8XPK’s Doylestown tower site early Sunday morning September 11th, 2016 to replace the dual band Diamond ultra-flexible repeater antenna with a commercial folded dipole antennas for VHF and UHF bands. The small crew included a Joe and Dwayne, professional climbers that know their business as you’ll see in some of the following pictures. You can click any of the pictures for larger versions.

While the big, dual band, Diamond X700HNA antenna worked well most of the time on the repeater, we found over time that a design flaw in the antenna caused problems in a full duplex system. This flaw caused so much noise on the repeater that it was unusable when the wind picked up and moved the antenna around. To correct this problem, the flexible antenna was replaced with proven solid commercial antennas that do not flex in the wind.

Why was the old antenna noisy?
In a home station, a normal ham transceiver is either transmitting or receiving, usually not both at the same time. In a full duplex repeater, nearly 100 watts of RF is sent to the antenna from the transmitter, at the same time the receiver is also listening for a few hundredths of microvolts of weak signals from users’ hand held radios. When the wind blows, if there is any movement of the metal parts inside the antenna while it is handling the 100 watts of transmit power it causes very small arcs and sparks between those metal parts inside the antenna. These arcs have an effect similar to mini-lightning strikes for the receiver that is listening on the same antenna, and make noise in the receiver. The Diamond X700HNA antenna that was replaced was very long and flexible, and also had small metal parts inside that were designed to slide against each other as the antenna moved in the wind. These parts caused arcing, which made noise inside the antenna.

First – thanks to everyone in the club that helped make this antenna replacement possible through your generous donations and advance club dues payments. Those funds allowed the club to purchase a brand new commercial DB224E 2 meter antenna, a weather proof, cross band coupler to combine the VHF and UHF antennas into one feedline, recondition a like new DB408 8 bay UHF commercial antenna, and buy all the mounting hardware and connectors to do the job professionally. 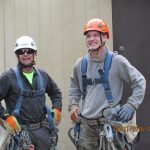 Also a big thanks to Marty for his help in coordinating both the purchase of the equipment and the work, and climbers Dwayne and Joe for a great price for their top notch work.

Another big thanks to AA8CS for providing bagels and top notch coffee to fuel the morning!

The antennas were assembled and prepared on the ground in advance by Barry KI8B, Gary AA8CS, and Marty N8XPK. 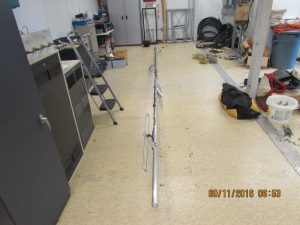 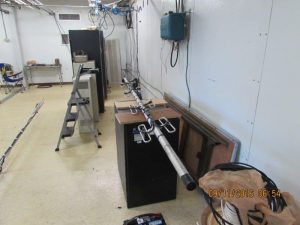 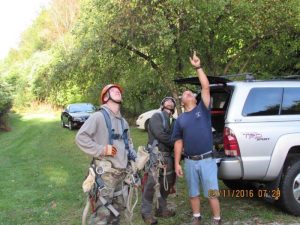 Custom feedline jumpers made of hardline were cut to length and assembled with connectors for the installation. 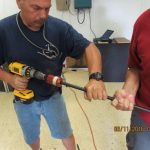 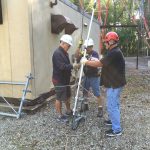 The outside work started at 7:30 AM for everyone (except for N8CD, who finally showed up at 8:40). Work began on the picture perfect day with a pre-job briefing of the plan. Once the SARA VHF and UHF repeaters were shut down, the climbers removed the existing Diamond antenna to the ground where it was disassembled from the mounting. Next, the ground crew raised the new mounting hardware up, where it was put in place, followed by the new VHF antenna, and then the UHF antenna. In the pictures below, you’ll see the VHF antenna has the larger loops on it and is mounted above the new tower hardware. The new UHF antenna is hanging below the hardware, mounted “upside down”. 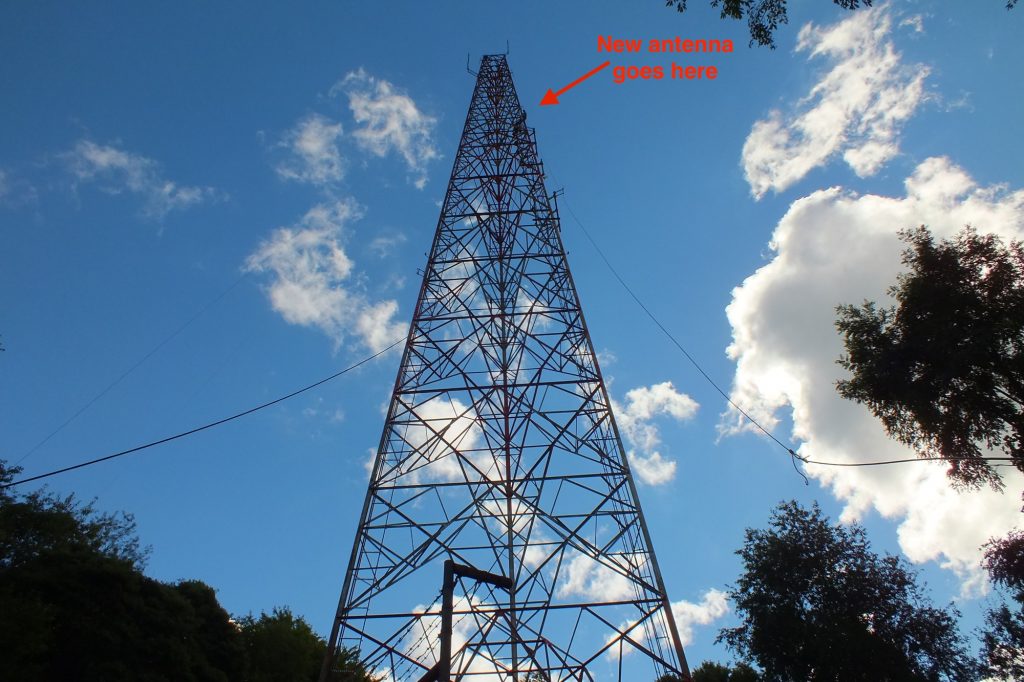 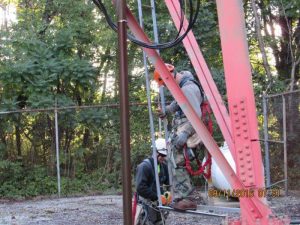 to setup the pulleys and other rigging that would be used to raise and lower equipment for the rest of the job.

Once the rigging was in position, equipment was raised up to the crew on the tower, starting with the new mounting standoff, followed by the VHF and then the UHF antennas.

While the work was taking place on the tower, the ground crew took advantage of the repeater outage to make full SD Card backups of the Raspberry Pi controllers used on both the VHF and UHF repeaters to make sure the system could be brought back online in the event of a major equipment failure. 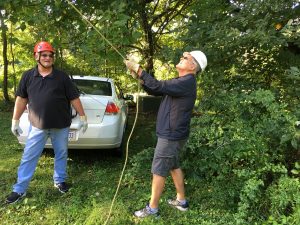 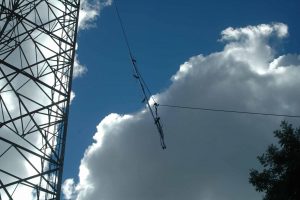 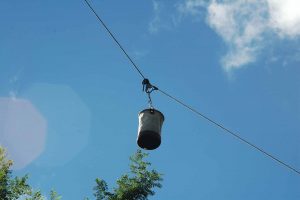 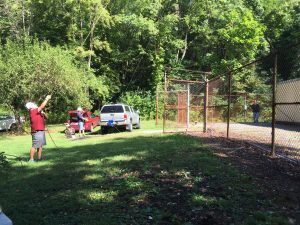 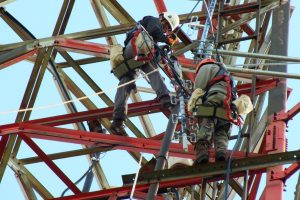 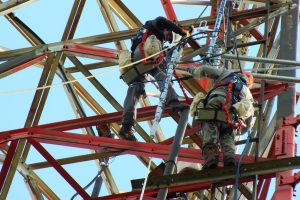 With everything assembled on the standoff, Joe and Dwayne swung the antenna assembly out to its final position. Dwayne connected the cables and properly secured them with a hair-raising climb out onto the new standoff hardware. 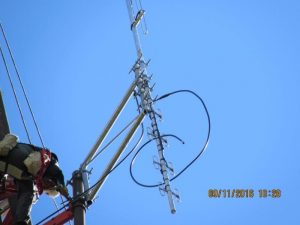 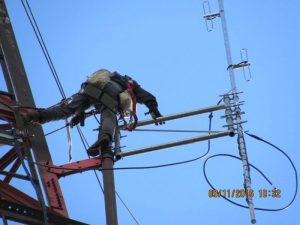 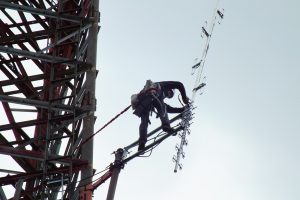 The final assembly is a thing of beauty in the eyes of a ham operator. 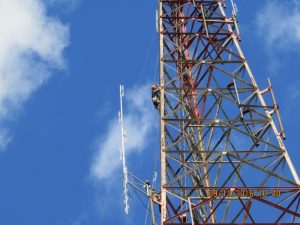 SWR was checked from the repeater cabinet to ensure everything was connected and working as expected. Both the VHF and UHF antennas gave a very acceptable 1.2:1 SWR reading when the installation was complete. 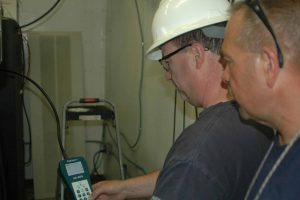 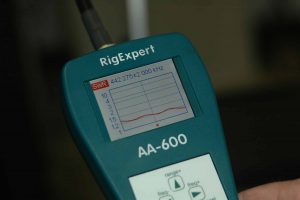 Finally, the system was brought back on the air by Gary AA8CS. 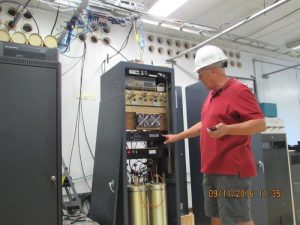 AA8CS bringing the mighty 39 back online

Here’s a full set of pictures from the day, which you can view as a slide show: