Well, our scores are reported and everything is official so all that’s remaining is the Field Day Chairman’s Report. So here it is!

Field Day 2019 by all accounts I’ve heard was a success. I received a number of positive reports by radio and e-mail about SARA’s Field Day, including one Field Day veteran who said it was the most enjoyable Field Day he’d ever had. I’m taking that as the definitive word on people’s enjoyment of the event. The weather was also beautiful which helped out as well!

People Who Made It Possible

Starting off, there are a number of people that I need to thank specifically for making Field Day a success:

For this year, SARA started to roll out its new “core capabilities” concept with the purchase of a 80/40/20m triplexer and several club members purchasing matching bandpass filters. The design goal was to do 80, 40, and 20 SSB Phone through the triplexer in a continuous-operation mode. I built a three-mode fan dipole for the event and we had it well-tuned for the phone regions of each band. Due to a last-minute change of operating plans, only the 20m and 40m stations ended up going through the triplexer while the 80m station ended up on an inverted-V to support FT8 operations. All three main stations used bandpass filters and aside for some periodic interference from some 100W FT8 operations on 80m, everything performed flawlessly together without interference. The goal of operating 5A worked out well and there were no logistical issues.

The 20m system was deployed with the intention to do 20m during the day/evening and 160m overnight. Interestingly, we found that the 160m dipole tuned up nicely on other bands as well and was pressed into operation on some other bands/modes and still didn’t interfere with the other stations.

Overall the new core capabilities concept was a great success!

Ken KA8OAD operated his 10m and VHF/UHF system successfully while Mike KD8QTU operated on 15m and hit a number of openings on that band this year.

For next year, we plan to continue on with this plan and continue to build out SARA’s capabilities. Next year, we will definitely operate three stations for SSB Phone for 80, 40, and 20 (and CW on 40 and 20). We’ll have a separate station on a separate antenna to do CW and FT8 on multiple bands using a tuner, primary for 80m CW and FT8. We’ll have to work out how to best position the antennas to not interfere, although we ended up pretty good this year without planning that out in detail. Next year, the CW/digital station may end up with an OCF tunable dipole to most effectively support all the main bands. In this scenario, we would likely end up operating 6A next year.

Finally, there was some on-site discussion about SARA perhaps getting a multi-band vertical such as a Hustler 5BTV and putting that at the top of a mast rather than a wire dipole. So the club-purchased additions for next year will likely be a vertical antenna and some club-owned bandpass filters.

SARA takes particular pride in its food. This year, Bob W8IJG turned in his usual excellent culinary feast. Saturday dinner was Italian sausage with Bob’s famous macaroni salad and some excellent desserts, including ones from Bennie KC8DEO and the Millers (KE8FRP et. al.). Sunday breakfast was Bob’s Cowboy Breakfast Casserole and some sausage patties. Needless to say, no one went hungry during the event!

A number of photos were taken at Field Day. Here’s a clickable gallery or you can go to the main Field Day 2019 photos gallery.

John N8CD setting up the score board.. 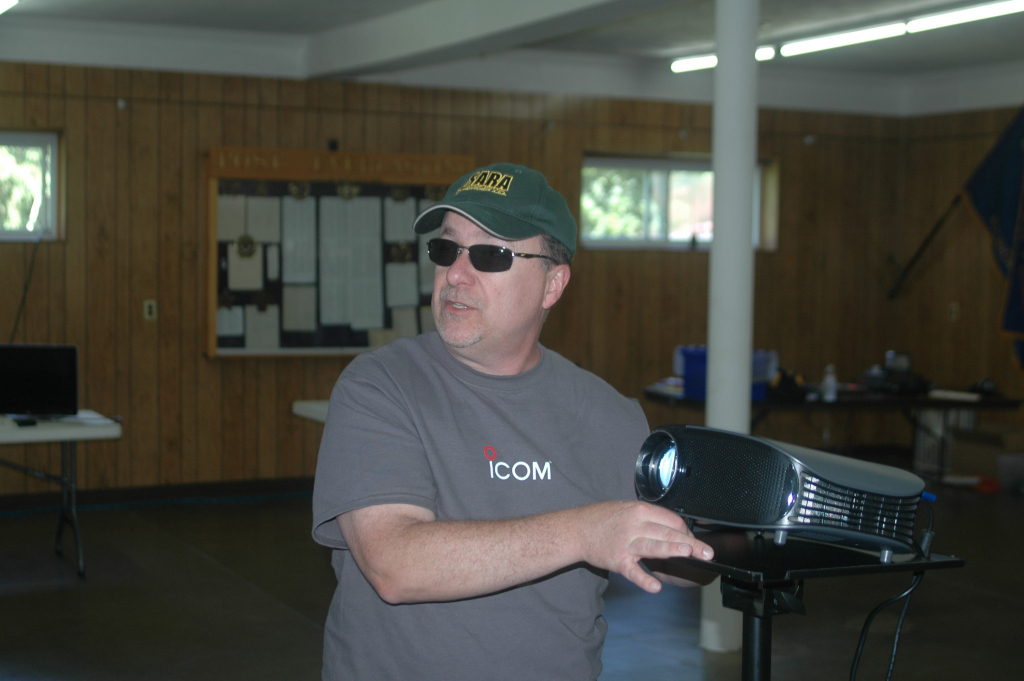