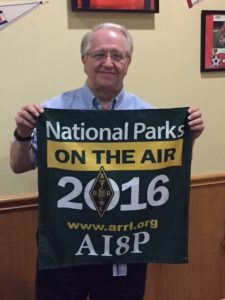 In conjunction with John Meyers’ “Life After NPOTA” presentation, SARA members were recognized for their NPOTA operating efforts with certificates during the March 16th SARA club meeting. Heading the list of recipients was Dennis Conklin AI8P who was number one in Ohio on the Activator Leader Board with 185 park activations. This score also ranked him number 16 nationally in activations. Also Dennis found time to score a 336 on the chaser board. That ranked him 20th in Ohio for chasers. For his efforts Dennis received a certificate from the ARRL and from SARA. Nice job Dennis! 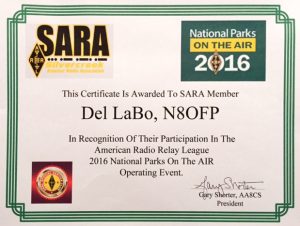 Allan “Zeke” Zadiraka AB8OU led SARA chasers with an outstanding score of 375 which placed him 15th overall in Ohio. Looks like that Contest University seminar at Dayton last May is paying dividends for Zeke. Below is a compilation of all NPOTA activity by SARA members. All participants have or will receive Club certificates for their participation. I want to thank Jason McCormick N8JDM for parsing the data and Zeke AB8OU for designing and printing the certificates. Additionally, I want to thank all the SARA members who took part in this great event which sparked the competition, conversation and enthusiasm. Good job all!