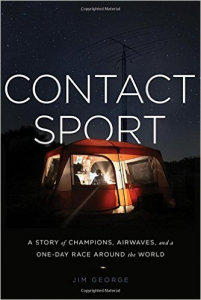 A STORY OF CHAMPIONS, AIRWAVES, and a

ONE-DAY RACE AROUND the WORLD

Recently I received a QSL card from N3BB for a contact during the 2016 North America QSO Party, cw. Enclosed with the card was promotional material for his book on the World Radio Team Championship 2014 (WRTC 2014). After several days, this encouragement resulted in my going to Amazon and start reading the look inside preview. When the preview suddenly ended, I quickly purchased and downloaded the book so I could continue reading. Returning that night after an interruption caused by a dinner meeting, reading continued late into the night until the book was completed. Since it is extremely rare that I am able to binge read anymore, especially a non-fiction book, this will give you an idea of how much I enjoyed the book.

The WRTC is an international iron-man competition in contesting held every four years. Two man teams of the world’s top contesters compete for 24 hours under primitive conditions in the yearly IARU HF World Championship contest. Teams qualify based on scores from two years worth of major international DX contests. The outcome of the championship is to be based on operator skills, not their equipment. Each team provides two 100 watt stations. The host sponsor provides a tent, generator, tribander antenna for 20-15-10, and 40 & 80 inverted-V’s. No superstations for the WRTC. The sites for the 59 teams in WRTC 2014 were selected so no site gave any team an advantage over other teams.

The author, who served as a driver for one of the teams while researching the book, spins a tale of European 220 volts soldering irons running on 120 volts, the dedication of the volunteers that organized and supported the event, unbelievable QSO rates, ultra-high speed CW that vex the rest of us, geographically challenged drivers and operators that go 24 hours without a break for any reason. Tim Duffy, K3LR, makes a cameo appearance as the driver for the first YL team in the championship. The XYL’s should enjoy the tales from the “Ham Widows Ball”.

The judges efforts to determine the winner showed the need for all operators to submit their logs for checking the team’s logs, even casual operators with just a few contacts. With the winning score over 7 Million points, it’s hard to believe that positions on the podium can depend on a single contact.

Personal recollecton of WRTC 2014 was the ARRL Centennial W1AW operation suspended for a week. Reading this book changed how I will view the QSL cards from the three teams I worked. It is a great book for anyone interested in or curious about contesting. It addresses the operator and not the super station showing what can be done by good operators with simple statons.