This article and pictures are courtesy of Del, N8OFP:

We started at Buehler’s as usual. Bob (W8IJG) and I were the only hunters.

We had a pretty good signal to the east and to the west. As we swept the beams around we could hear a little heterodyne like there were two signals on the same frequency. But being there are so many buildings in that complex it’s hard to tell which reading is real and which is a reflection.

I left first and headed north on High Street then east on Reimer Road. I quickly lost the signal. I continued head east on Reimer until I got to Medina Line Road where I turned left. I stopped at a small cemetery on Medina Line (at the top of a hill) to take a reading. The signal was now due west back towards Wadsworth. I continued south on Medina Line until I got to Greenwich Road where I turned left and headed back towards Wadsworth.

As I approached downtown Wadsworth the signal was getting stronger and stronger. I had a feeling they might be in Durling Park so I headed there. When I arrived there the fox was very strong so I got out and started walking around the park. About that time the fox signal started to fade out, not because I was too far from it but because the battery was dying. So Wayne (AC8RA) had to be the fox. He used his smart phone to generate a tone and manually ID’d. I walked all around the park but no luck finding the fox. I left the park and drove around some more taking several readings. The readings kept taking me back to the park. Just as I was pulling into the parking lot of the park, Wayne called me on the phone. He was wondering where we were and how long we wanted to continue (it was around 11:00). I told him where I was and we hung up so he could contact Bob. Wayne called back and said Bob had found one of the foxes and that since it was getting close to lunch time he would give us the frequency to the final fox.

I programmed the final fox frequency in my radio and took some reading. The strongest signal was southwest from my location. I head west on Boyer St. (Oh yeah to make things worse the city of Wadsworth was having a giant sidewalk sale and the square as well as some of the side streets were closed to traffic) to Pardee St. From the beam heading I had a real good idea where the final fox was. I took Pardee to College St and headed west. I figured since Wayne’s entire family would be at the final fox they were likely in Memorial Park, the question was where were they, one of the pavilions or at the Kaleidoscope. A quick pass by the pavilions and no Wayne. On to the Kaleidoscope and sure enough they were there, and the kids were having a ball.

As it turns out Wayne used all three foxes. Two where set 10Khz apart (one on 147.520 and the other on 147.530). One fox was at the upper portion of Holmesbrook Park off Leatherman Rd. The other was behind city hall in downtown Wadsworth.

Bob found the fox at Holmesbrook while I was walking around Durling Park. Turns out I was a little over a block away from the fox behind city hall.

I did manage to get a number of funny looks from people while I was walking around the park with my tape measure yagi and hand held. No one asked any questions, I think they were afraid too……  🙂

Anyway I ended up with a total of 14 miles traveled and Bob had 17 miles, but because Bob did find one of the other two foxes he was declared the winner. 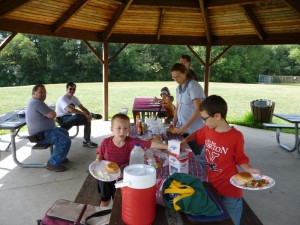 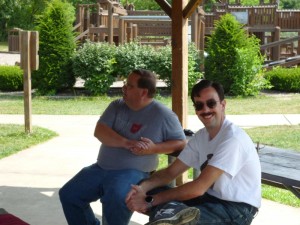 As the winner Bob will host the next fox hunt. Bob said it would likely be sometime in September, so keep an eye out for an email announcement.

Thanks again to Wayne, and his wife for a fun hunt and great lunch.