Well, today started off with a lesson in why we do drills. As Fred/KD8GYS was setting up the 2-meter station at the Rittman Police Department to run the net Mr. Murphy arrived to assist him! The radio would transmit but not receive! We briefly did some testing but if wouldn’t receive. So Fred packed up the P.D. station and made it home in time to run the net from his home QTH so there is no picture of the net being run this year. 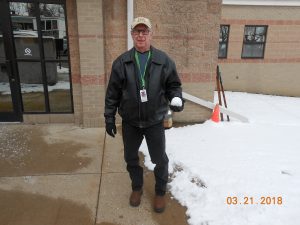 KD8GYS during the spring skywarn drill

Fred, as usual, ran a very successful net with a total of thirty-four (34) check-in’s from five different counties (Medina, Wayne, Summit, Stark & Huron) unfortunately nothing was heard out of Ashland, Holmes, Portage or Tuscarawas counties.

On a humorous note, as Fred was relaying our results to the National Weather Service on the 6-meter backbone Cuyahoga County reported in right after him with 22 check-in’s and the NWS told them, “Looks like Wayne County got ya”! To which Cuyahoga County replied, “Well, there’s always next year!”.

Thanks to Fred for running the net for the 6thyear and to all of those who checked in and made out net a success.